Statistics and ratings indicate that more men attend, watch and follow the NFL in greater numbers than women.  Take a casual look at fantasy football leagues, and those numbers widen even more.

So if it were the case, you could forgive the NFL for targeting males in its advertising.  But being the wise, billion-dollar enterprise it is, you’ll hardly find its 32 teams (total worth: $63 billion) spending its marketing dollar only where the big money is located.

Rather, it places a strong emphasis on women, and wouldn’t dare make the catastrophic mistake of alienating an important part of its fan base.

So, no, the NFL won’t be unveiling new marketing slogans this season which focus on one gender, such as:

(You might note that none of these items referenced are feminine products.)

The NFL knows how to be popular and prosperous, so currently you see a successful, inclusive slogan like, “Football is Family.”

All of this makes the communication from good2grow so unusual, who claims to be “a family owned and operated company” with “one simple goal—creating wholesome, nutritious drinks in irresistible packaging kids love.”

The juxtaposition is unusual, because families include dads, and in general, kids love their dads.  So if good2grow wants to create a product kids love, it should consider the other half of its customer base, which also includes boys, many of whom will eventually become dads.  Right now, it’s not speaking to dads in print, or on its website.

What do you say, good2grow?  Can dads be a part of your team?

When kids refuse to greet a friend or guest, that’s considered rude behavior. Similarly, if a child deliberately ignores its parents, many experts seem to agree that the child should be left alone.

Based on this approach, Juicy Juice doesn’t deserve a word here, or a moment of our time.

Yet, those same experts also insist that limits, expectations and consequences must be spelled out more clearly at a calmer time so that offenders clearly understand what they’re risking.

Earlier this month – including right through the Father’s Day holiday – Juicy Juice unveiled a marketing campaign that ignored dads in every way possible. It discounted fathers through various tweets, hashtags and sayings which exclaimed again and again that dads don’t count. Sadly, this isn’t the first time we’ve seen it indicate that dads mean nothing to it as customers.  And Juicy Juice isn’t the only one.

This exclusionary marketing this is a form of old-fashioned, reverse consumerism discrimination. Repeated tweets to Juicy Juice were ignored, which isn’t exactly smart business, because rather than talking to some of its customers and dialoguing about its approach (not that it could even be justified), it lost some instead.

Fathers 4 Justice eloquently spells out some of these limits and expectations, and the consequences of Juicy Juice’s actions have already been identified here.

Any mom should be embarrassed, too, by this discounted approach toward their husbands. What’s more, Juicy Juice was even awarding $5000 in prizes to celebrate the various ways in which dads have no involvement in providing kids nourishment through its juice.

Perhaps by next Father’s Day we’ll see a renewed approach at marketing and communication where dads can feel like they’re customers too.

Anything else is just rude behavior.

Sure, this 2006 ad (featured) is a little old, but it’s BDM (before dadmarketing), so we feel it’s worth a little attention here today. 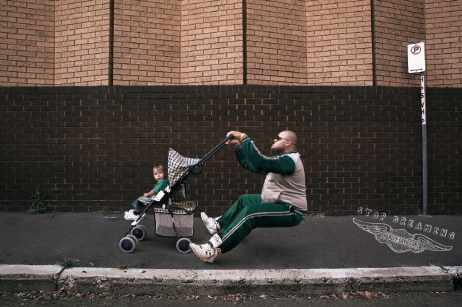 There’s something to be learned from the magnificence of Harley-Davidson’s marketing team. It’s difficult to name another brand where its customers are willing to permanently etch its logo on their bodies.

The ultra-cool aura of a Harley has moved beyond its outlaw biker days and found its place among a variety of customers – both genders included – that seek a certain image and freedom.

When you buy a Harley, you’re not really buying a motorcycle, you’re buying a lifestyle.

This featured ad proves that a classic, established brand steeped in tradition is willing to go non-traditional when marketing its product to customers.

You don’t have to overanalyze the ad – it speaks for itself in simplistic terms. No, that’s not just a man in the photo, it’s a dad! And a baby stroller? Whoa, would Johnson & Johnson, or Boppy, or Desitin, or Similac, et al, even dare consider putting anyone other than a mother in control of stroller wheels in one of its ads? Hardly, as those marketers can’t move beyond the fact that mothers have no more instinctive ability to care for children than fathers, yet their ads hardly reflect that fact.

Check out Juicy Juice’s “Moms Knows Best” promo it just unveiled today, a mere two days before Father’s Day.  Talk about a slap in the face to dads everywhere.

Whether you’re a parent or not, a male or female, it’s hard not to smile at the genius of Harley’s ad. Sure, this ad targets guys first, but Harley has no stereotypical customer.

It’s this kind of thinking that has made Harley-Davidson what it is today, and why so many other businesses should have that same mindset, rather than not speaking to dads when it comes to the big bucks it spends on marketing.

What do you get when you cross two perpetual so-called “mom” territories: juice boxes and snack time? You get yet another dad exclusionary, old school approach to marketing from none other than Juicy Juice.

But this time it seems to hurt a bit more, as Juicy Juice is a relatively newer product (when compared to, say, other stodgy brands), and Juicy Juice even professes to have ads that have “changed over the years.” Note that it didn’t say changed for the better.

Another sad aspect is that this is another company who apparently likes to negate dads and all the fun they provide at snack time. We personally know many dads who love snack time, and have even given names to the creations they make for their kids: Quesa-daddies, Daddy Cheesy Melters, Sugar Daddies, Father Son Buns.

Those sound like some fun creations! Who knows how many untold, unrecognized culinary dads out there are shaping their kids into fantastic human beings one snack at a time?

Juicy Juice provides another bit of smack-in-the-face irony when it exclaims on its website: “One of the greatest gifts of parenthood is being able to relive those wonderful experiences with your child. That spirit inspires every product we make.”

Apparently, that spirit is only being doled out only to mothers and turning its back on dads.

Give it another try, Juicy Juice – dads are listening.