Its “Kid-Tested. Mother-Approved” slogan has adorned the box of Kix since 1978, but the famous multinational manufacturer has finally succumbed to the voices of fathers nationwide. General Mills quietly revised its long-standing motto with a new “Kid-Tested. Parent-Approved” saying that adorns its familiar and newly updated yellow Kix box. 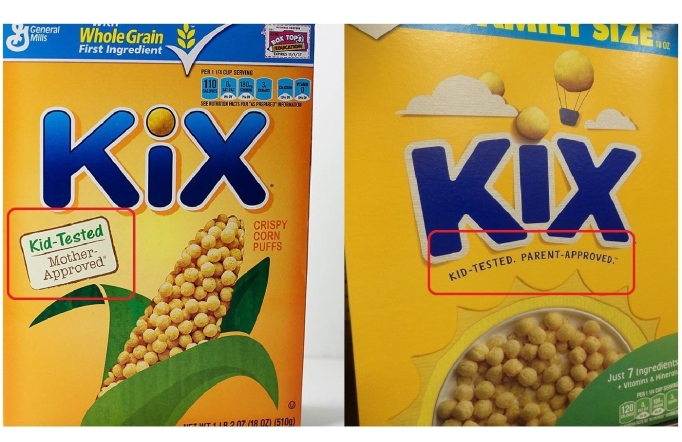 “Kix is excited to announce that we have updated our slogan to ‘Kid-Tested. Parent-Approved,’” said Mike Siemienas, General Mills spokesperson. “This new slogan is more inclusive as the word ‘parent’ applies to the individuals raising children.”

Siemienas said the updated slogan and new box “worked out well” so that both happened at the same time.

General Mills has yet to phase out the slogan entirely. Its Kix page at generalmills.com still trumpets the previous wording, and kixcereal.com not only contains the old slogan, but old box logos. Siemienas added that General Mills is working on updates to company websites.

For now, dads are overwhelmingly pleased with the Kix change. The National At-Home Dad Network – a volunteer-run, nonprofit which provides support, education and advocacy for stay-at-home dads – lauded the change on their Twitter page.

Anyone else notice that @GeneralMills' #KixCereal is rolling out a more inclusive "Kid Tested, Parent Approved" slogan on their boxes? 1/3 pic.twitter.com/QalMTpE2Zn

Kix boxes with the old slogan will likely still appear on store shelves, but any new boxes being produced have the new wording, according to Siemienas.

The box revision comes on the heels of a similar switch in the United Kingdom by Kellogg’s after pressure from dads who complained of its exclusionary Coco Pops box.