Some say there isn’t any common sense in Washington, but dadmarketing would argue otherwise. The year was 1995 when the NBA’s Washington Bullets changed its nickname to the Wizards. Apparently then-team owner Abe Pollin decided the Bullets name carried violent overtones, especially in a city with a high homicide and crime rate. And apparently he was 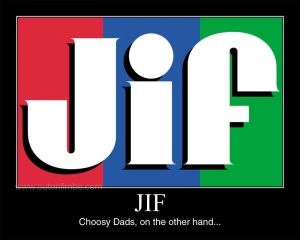 One can certainly argue the eventual new name – how it hasn’t caught on, how it carries other negative undertones, how it is a product of a fad at the times – but that would be missing the point. “Bullets” simply wasn’t appropriate anymore. It didn’t take the action of one owner to spur it along, because many realized it. The change was long overdue.

And then you have Jif Peanut Butter’s slogan: Choosy Moms Choose Jif.

It’s not just in Jif’s latest TV ad, it’s plastered all over their website, and it’s been a part of the brand for a long time.

I can hear people already (both moms and dads), because many of them spoke out when we discussed Kix’s outdated motto:

We here at dadmarketing like to think of the Jif slogan as SWASFTSOI: Staying With A Slogan For The Sake Of It.

To explain further, imagine for a moment, that the United States government had a slogan before 1919 (like the Army’s “I Want You” slogan) which read, “Real men vote.” It might have been a decent slogan back in the day and worked well at the time, because after all, only men could vote then. However, let’s pretend they kept using that slogan to this very day, and we all saw it when we entered voting precincts. Of course, it would seem a tad outdated because we all know that women can vote, but wouldn’t it yet sting a little to both women and men? Wouldn’t it seem a little offensive? “Real men vote” wouldn’t take anything away from the fact that females could still walk in and exercise their right to vote, but it would just seem old, tired, antiquated – even silly and useless.

That’s all we’re saying about Jif. We get the fact it’s your long-standing company slogan/brand/wordmark, but it’s time to move on and find some other way to market your product (which tastes good, by the way). Change with the times. Jif is like the Washington Redskins of sandwich spreads: an entity that refuses to change out of stubbornness. Their attitude could also be filed under the dreaded, this is the way we’ve always done it.

And yes, Jif, we’ve noticed the latest add-on to your TV commercial which states audibly, though not in print, “Choosy moms and dads choose Jif!” This hardly solves the problem. In fact, it exacerbates it. It’s kind of like saying, “Gosh, I barely notice that huge wart on your nose.” It makes the slogan even more old-fashioned laughable, drawing attention to the fact that Jif has excluded dads for years, if not decades.

It’s the same way that your local high school has had the embarrassing nickname “Lady Bears” for all of its girls sports teams? Why not just “Bears” for both genders, or at least “Gentlemen Bears” for consistency? Ugh. Another topic, another time.

So Jif, let’s get down to business and fix it, the right way, once and for all. Show moms and dads that common sense is alive and well. Dads mean a lot to you, right?

Being a watchdog for the marketing/advertising world is a little bit like being a movie critic. We’re relentlessly trying to evaluate and analyze items we see, and it takes a lot for us to witness someone achieving perfection. We lean toward optimism, but after constant trying of teach an old dog new tricks, we sometimes find ourselves thrust into a position that seems cynical.

When writing about the businesses we see in print or on television, we encounter a quandary: the medium only has so much time and space to offer. We recognize the limitation, but also identify that much is expected and required of the company – the one who has invested

thousands or millions into its message and people.

A few days ago we came across a TV ad for Sunbutter, a product we use and love. We wrote about their dad exclusion, and Sunbutter immediately entered into a sincere discussion with dadmarketing. They recognized the fact they should be including dads in their slogan, and plan to incorporate them in future ads.

They “got it” right away.

We’re not here to proclaim validation. That is not our mission. Far more important, and the reason we write today, is that a company listened. We didn’t ask them to take our stance, just listen.

They didn’t appease us with a one-time corporate-speak email that they’ll “bring it to the attention of the marketing department.” They didn’t pacify us with promise of a special message-to-come only around Father’s Day. They didn’t set up a patronizing dads-only section of their website.

They simply listened. And we weren’t even expecting change, but that appears to be the direction they’re heading after some genuine, honest and open dialogue.

In short, we salute the people of Sunbutter for their exceptional ability to truly listen to their customers, because we’re one of them.

A good product – which they have – is only part of the equation. Good people is the other part of it. Having both is the sign of a great company with even better things to come.

We all have our products that we truly believe in. Be it a combination of taste, quality, performance, functionality, tradition, or simply that it was used in our childhood, there are some products we’ll buy no matter what.

Sunbutter is one of those for me.

It’s a great substitute for peanut butter and the taste is surprisingly good. More than anything, it’s because someone close to me has a peanut allergy, and I prefer not to have regular peanut butter in the home when she visits. Sure, Sunbutter costs a little more, but it offers flexibility with food and peace of mind that she’ll be safe.

Having peanut safe products is serious business, as it’s a matter of life and death for many. Not only is Sunbutter peanut-free, but gluten-free, egg-free and dairy-free, and I suspect we know someone whose diet is affected by these food features. Finding a match for all these “free” characteristics while shopping is a little like finding a senior citizen at a One Direction concert – near impossible.

Sunbutter has such a fantastic niche in the food world, carving out a safe haven for those who have never enjoyed the sweet pleasure of PB&J, or peanut butter fingers, or candy buckeyes.

And then, like a movie hero who suddenly turns bad, Sunbutter alienated dads everywhere with one swift butter knife to the heart in their latest video (note slogan at the :24 mark).

I personally know a dad who gasped, “I am the one who discovered the product, who always purchases it, who promotes it to others, and who regularly uses it. Yet I get excluded from their ad slogan and mom gets all the credit?”

I was surprised to learn that the word “hack” has exactly 19 different definitions at dictionary.com, and 24 if you count “verb phrases.” Perhaps

even more surprising is the mostly negative connotations that come with the word hack: to damage, to cut ruthlessly, to kick at shins (ouch).

But we’re groomed from a very young age to believe that all surprises are a good thing, so Walgreens keeps my surprises coming. First, they not only choose to use the word hack with its latest foray into the Twitter-verse, but second, they alienate dads by putting only the word “mom” in front of it, and then hashtagging it.

As you can imagine already, this of course, is the theme of Walgreens’ newest Twitter ad campaign (pictured) that allows us to chuckle at all of our kids’ oopsies in life, which never go “according to plan,” and feature children making all kinds of laughable, silly, goofy messes.

A recent magazine ad states, “We’ve got your back, whenever and wherever you need us,” and urges us to buy their new line of Well Beginnings products (and nope, there isn’t any dad on their website to be found).

What would motivate a dad to shop at Walgreens after seeing this skewed Twitter crusade?

It sounds like their marketing people are hanging out with the Proctor & Gamble people – people who renounce or surrender individual independence, integrity, belief, in return for money in the performance of a task normally thought of as involving a strong personal commitment.

Yeah, that’s a definition of something that rhymes with “ack.” Surprise, surprise.