The year was 1985 when the third largest toy maker in the world, Hasbro, unveiled its new My Buddy line – a doll geared toward young boys.  The toy was relatively masculine in color (red, blue) and clothes (overalls, sneakers, ball cap), and was marketed as a buddy tagalong during playtime, not unlike man’s original best friend.  Its resemblance and feel to that of a Cabbage Patch Kid was no accident as Hasbro was trying to capitalize on the then-intensely popular doll designed largely for girls.

Not much remains from My Buddy’s short-lived tenure as it disappeared sometime in the 1990s, though you can certainly find vintage dolls at a web browser near you.

Perhaps more curious is a visit to its concise Wikipedia tribute page, where one small line reveals just how little progress society has made regarding toy stereotypes and breaking gender barriers:

“The (My Buddy) idea was both innovative and controversial for its time, as toy dolls were traditionally associated with younger girls.”

For its time?  That was 32 years ago, and has anything really changed?  Take a walk down any toy aisle and it seems the answer is barely.

However, one progressive company is looking to make good on lost time, and from the neglect of our toy forefathers and their shortcomings. 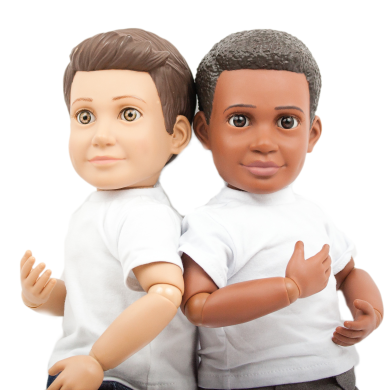 “We want to make it easy for boys to feel comfortable playing with dolls and get rid of some of those gender stereotypes that we see as harmful,” said Kristen Jarvis Johnson, co-founder.

The concept arose through a Kickstarter campaign and has blossomed into a full-fledged boy doll company set to make serious noise at next month’s famed New York Toy Fair, as well as through a partnership with the UN Women’s solidarity movement, HeForShe. 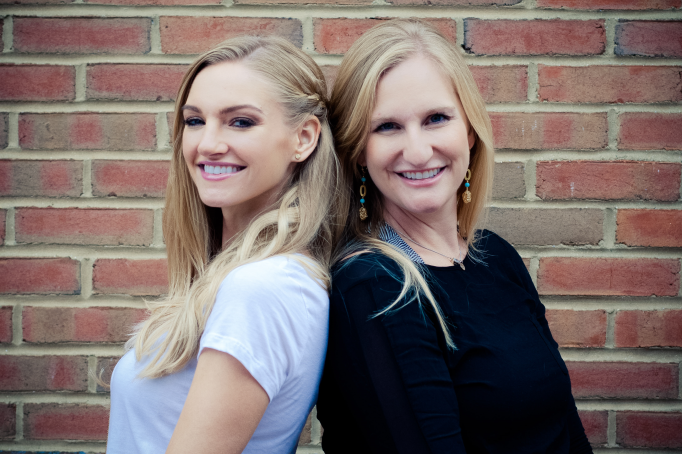 founded their enterprise out of frustration.  When Johnson became pregnant with her second son, she wanted to purchase a doll for her older son – one that could help him get accustomed to the future arrival.  She visited store after store and found none that could withstand serious play, nor offer true masculine features.

Johnson would eventually leave her law career to raise her two boys full-time, and fully immerse herself into the Boy Story concept.  Throughout the Kickstarter phase and initial sales, which began this past October, Johnson has heard plenty of positive feedback from parents who believe her toy is long overdue.

“Moms love it for the most part, and grandmothers love it,” Johnson said.  “A lot of dads like it, but a lot of them are skeptical about it.  When they see it in person, they think ‘That’s so cool.’”

Boy Story dolls are not only sturdy, but they have plastic sculpted hair (ideal for clean-up after, say, sandbox play), heavy canvas material for their bodies and each comes in large, sturdy boxes.  There are even dolls of different skin and hair color. 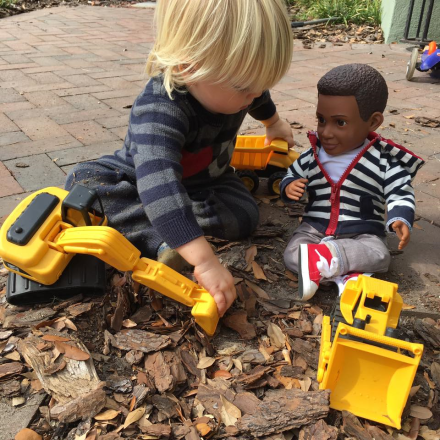 The dolls’ primary target age is 3-8, and they’re designed for both boys and girls.  Boys, in particular, appreciate finally having a relatable toy that helps them celebrate boyhood, while girls appreciate having a companion to go with their female dolls.

The concept is also unique in that it may be the only toy currently on the market which allows boys to embrace and grow their natural desire to become nurturers.  Girls have plenty of feminine baby dolls to make-believe being a mother, but boys have nearly nothing by way of masculine toys that allows them to mimic being a daddy.

“We haven’t seen (a boy doll) partially because society, for a long time, said we have women in the home who took care of that turf,” Johnson said.  “And boys weren’t really considered to be in the home and nurturers – and the toy market catered to that, and that developed over time that boys don’t play with dolls.  But we’ve seen that boys play with dolls when you give them dolls.”

Johnson fully believes their concept is changing with the way the family dynamic has evolved.

Boy Story, she believes, finds a proper balance between the real world and the toy market, which hasn’t caught up to the times.

“The toy market, like it or not, has said that pink is a girl color and blue is boy color,” Johnson said.  “And if you try to give a pink baby doll to a boy, it kind of goes against the grain of the trend that the market is pushing on children.  So, we’re trying to erase that cycle in a way that recognizes that there is that conditioning in society, and that boys want things that are boyish.  You’ve got to break down that barriers before you can play in the sandbox.  Let’s give him a doll, and once they’re comfortable with that, we’ve made the sandbox more equal.”

Johnson realizes not everyone is a fan of the Boy Story concept.  Some tell her it’s not needed, some insist it won’t sell, and others condemn her for “trying to turn all of our boys gay.”

Millennial parents tend to warm up to Boy Story because they’re tired of the hyper-gender, pink-blue issues with toys.  Generally, older parents don’t approve of the product, and some men’s rights activists think Boy Story is pushing feminism down their throats.  If anything, Johnson contends, they’re trying to bring more authentic masculinity to toys without action figures needing to appear ultra-muscular, wield violent weapons, or don a superhero cape.

“I get reactions all over the map,” she said.  “Some will want it and some won’t, and that’s fine.  If someone says, ‘Boys already have dolls, they have G.I. Joe dolls’ – my response is that the dolls we make are completely different.  We’ve had really positive sales and have a lot of parents who appreciate having a boy doll available to them.  For us, it’s about expanding diversity in the toy market.”

More than just toying around

Johnson said that American Girl Doll once sold a boy doll that was only sold in a set with twins, and the size was smaller.  It discontinued that product in 2016.

So, she’s thrilled to bring this new, modern idea to the illustrious New York Toy Fair held Feb. 18-21, where Boy Story stands to gain a huge leap in legitimacy and recognition.

“You can really feel out the market there,” Johnson said.  “You get a much stronger sense to feel what other retailers are interested in you.”

Boy Story has also partnered with HeForShe, where it will launch a special edition doll in honor of International Women’s Day on Mar. 8.  Johnson believes that Boy Story’s mission to engage men and boys as agents of change aligns perfectly with HeForShe’s work.

“It’s a huge opportunity for us, but also for us to really tap into distribution networking to get our dolls out there so we’re accomplishing our mission,” she said.  “It’s great for legitimizing our company, but also for helping HeForShe and its work.”

The toy industry, Johnson believes, loves the divide between boy and girls toys.  By painting one bike blue and another pink, companies make more money when they find a way to separate products by gender – they’re creating demand even though there’s no difference in the two bikes.

“A doll is a little bit different,” she said.  “Dolls represent people, and they have genders associated with them.”

But the divide was never fully appreciated by Hasbro in 1985.  Strangely, the My Buddy box never proclaimed the toy as a doll, nor called it a boy.  It almost seemed uneasy about admitting reality, something that Boy Story proudly declares:  this doll is indeed a boy.

For all the positive mojo Disney cranks out on a regular basis, it appears to have a genuine problem with finding – how shall we say it – balance.

Last week a story circulated on the Internet titled, “Where Are the Moms in the Star Wars Galaxy?”  The writer argued that while mothers do play a role in the Star Wars universe, they don’t receive as much thematic prominence as father-son/child relationships.  It’s a thought-provoking piece with strong merit – highly recommended.

The problem is, the panel isn’t a representative sample of everyday people – it’s overwhelmingly comprised of only moms.  Of course, this is not a bad thing, but the imbalance is; it’s important to remember that dads are part of families, and vacation planning involves them, because they too have plenty to share with potential travelers about the topic.

But Disney awkwardly placed a lone dad on this year’s Moms Panel, thereby disrespecting and ignoring his parental title and thus cutting last year’s dad total – if you can believe it – in half.

We wrote about the Disney Parks Moms Panel last fall and received positive feedback from readers who also implored Disney to catch up with the modern world and to better represent what families mean today.

We realize that equality takes time, so we didn’t expect Disney to instantly even out the number of women and men on the panel, although doing so would rightfully provide a true representation of all parenting travel issues.  However, we thoughtfully anticipated a name change in the spirit of authentic, modern parenting.

Unfortunately, Disney let us all down, because it’s not just dads that end up on the short end of the stick.  It’s the kids and the spouses who deserve a vacation planned at least partly through a fatherly perspective.  But they’ll hardly get that, because instead, dads are being treated like second-class parents who simply don’t matter.

Hilton also operates a similar travel panel with a comparable name – Hilton Mom Voyage – and it has a mere three dads among 30 panelists. 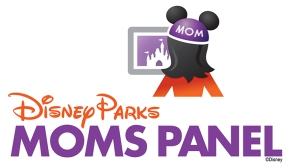 The members of next year’s Disney panel will be announced soon enough, but why wait that long to properly rename the panel?

Disney, let’s make things right, because families are stronger – and vacations are more magical – when we’re united as parents.