When kids refuse to greet a friend or guest, that’s considered rude behavior. Similarly, if a child deliberately ignores its parents, many experts seem to agree that the child should be left alone. 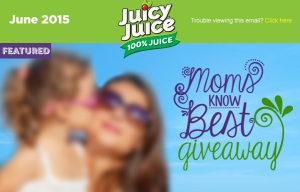 Based on this approach, Juicy Juice doesn’t deserve a word here, or a moment of our time.

Yet, those same experts also insist that limits, expectations and consequences must be spelled out more clearly at a calmer time so that offenders clearly understand what they’re risking.

Earlier this month – including right through the Father’s Day holiday – Juicy Juice unveiled a marketing campaign that ignored dads in every way possible. It discounted fathers through various tweets, hashtags and sayings which exclaimed again and again that dads don’t count. Sadly, this isn’t the first time we’ve seen it indicate that dads mean nothing to it as customers.  And Juicy Juice isn’t the only one.

This exclusionary marketing this is a form of old-fashioned, reverse consumerism discrimination. Repeated tweets to Juicy Juice were ignored, which isn’t exactly smart business, because rather than talking to some of its customers and dialoguing about its approach (not that it could even be justified), it lost some instead.

Fathers 4 Justice eloquently spells out some of these limits and expectations, and the consequences of Juicy Juice’s actions have already been identified here.

Any mom should be embarrassed, too, by this discounted approach toward their husbands. What’s more, Juicy Juice was even awarding $5000 in prizes to celebrate the various ways in which dads have no involvement in providing kids nourishment through its juice.

Perhaps by next Father’s Day we’ll see a renewed approach at marketing and communication where dads can feel like they’re customers too.

Anything else is just rude behavior.