These days Americans won’t put up with stereotypes and ignorance. We’ve reached a boiling point – and with good reason.

Just ask the Washington Redskins, where the almighty dollar finally pushed owner Daniel Snyder over the edge, forcing him to confront years of repudiation regarding his team’s controversial name.

Stereotypes are ugly because they’re overgeneralized and oversimplified ideas about people. They force an identity on someone or something that isn’t true.

With the rest of the America turning a critical eye toward all forms of ethnic and racial stereotypes, it’s hard to imagine brands still ignoring miscalculations in other areas.

For years we’ve written about Disney Moms and its refusal to retitle an outwardly discriminatory and exclusionary name. Overall, it’s a fantastic, well-intentioned program which offers Disney vacation advice from seasoned travelers.

However, the explicitly mom-only branding works to create an unknowing, needless divide in the parenting community. Not only does it refuse to acknowledge dads by name, it awkwardly inserts dads into a moms’ program and uncomfortably makes them a gender they’re not.

In 2019, Disney Moms quietly removed “moms” from its long-standing #SMMC hashtag and event name – Social Media Moms Celebration – but it was hardly enough.

The time has come to deal head-on with a program that should know better in today’s equality-focused world.

Yet somehow, someway it has spurned addressing the elephant in the room. Check out its April 27 post (also pictured above) where it continues to treat dads like secondary parents to the unfortunate extreme of ignoring their gender, identity and status in today’s modern family.

Families have noticed the omission on social media lately – perhaps a reflection of the pandemic’s stay-at-home nature which has affected our perception and awakened our senses.

Corporate America is being given little choice.

Just as it’s pressured by millions of people who know that Black Lives Matter, perhaps Disney will get with the program before its PR team is forced into spending unnecessary time playing catch-up with families who have had enough.

When Pizza Hut makes a significant menu change, the national media covers it. When the pizzeria in your hometown does something similar, the local paper doesn’t even notice.

If a New York City radio DJ says something shocking, it makes headlines. Someone could say the same at a tiny Midwestern radio station and it won’t be noted as much.

The Washington Redskins have their whole name controversy, but high schools with identical nicknames fly under the radar.

Bigger certainly isn’t always better, but it is unquestionably more noticeable. It’s also open to more scrutiny, because we expect a little more.

And so it goes with Walmart.

The nation’s largest retailer had a two-page spread in the October 2014 American Baby magazine and proclaims, “Parenthood is full of firsts.” But on the very next page, the ad says this: “When it comes to caring for their baby, moms want only the best.”

Walmart’s website (featured) mimics the same attitude as the magazine ad, which isn’t really a surprise.

Walmart takes a lot of flak for its policies and business practices, treatment of suppliers, employee compensation and working conditions. We’re not ones to comment on those matters – maybe they’re true, maybe they’re not.

However, there’s no mistaking to whom Walmart is speaking in its latest ad. It’s a shame that Walmart doesn’t find enough value in dad as a potential customer, or even as a nurturing parent.

Had the local, independent drug store done this, I wouldn’t even have spotted it. But at Walmart, I expect more.

Hey, isn’t that the slogan of another retailer where dads could take their business?

If you’ve never heard of a Boppy, it’s a unique product that was originally created as a baby support pillow, but also can be used to prop a baby during feedings. 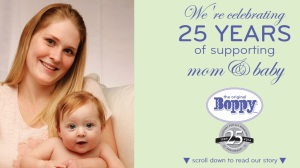 The concept is wonderful, and during its brief history has enjoyed a great deal of national publicity through TV shows, magazines and celebrity plugs.

The company appears knows a thing or two about creating a good product that works, but when it comes to marketing, they’re one of the worst offenders we’ve seen when it comes to some serious, major league dad omission.

In the Boppy’s world, dads are not present, plain and simple. Mothers should be greatly offended by this extreme, unwarranted dad exclusion, for it’s their husbands whom Boppy is shunning. Let’s take a look at how they reached this woeful state.

Support for all Momkind? We could see a motto like this making the grade, even being somewhat acceptable, at least two or more generations ago. Take Jif and Kix – it’s not like their slogans are proper or right or appropriate, because they remain 100 percent offensive and outdated. But even though they’re both like the Washington Redskins (refusing to change out of stubbornness) at least those old school slogans were born during an era when saying those things might have been customary once upon a time (like using a name such as Redskins).

The Boppy was invented in 1989! How can a company actually make this an official slogan in this modern era, let alone copyright it, all against better judgment in a world that demands equality? Boppy manages to downgrade fatherhood with a simple four word slogan, if not completely banish it, from their one-sided marketing mission. That’s one giant leap backward for all of humankind.

Here we have yet another website with a “moms-only” section. We get the fact that men and women are different as parents, but why exclude dads? Can’t dads feed babies with Boppies, too? Sure they can.

We’ve sent similar thoughts to other companies who respond with things like, “Yes, dads are our heroes too and we’ll take a look at it,” or “Check out this special dad section we created for Father’s Day.”

Why a special section? Why do something only once a year when the calendar tells you to think of dads in June? How about just calling it a “For Parents” section?

Take a look at the “25 Years!” menu tab on the website, which doesn’t invite dads to the celebration in any way. There you’ll find a giant photo of mom with baby and the script, “We’re celebrating 25 YEARS of supporting mom & baby.”

As long as Boppy thrives on stereotypes, we’ll offer one as we pose this question: if dads are supposedly the providers and earned the money to buy the Boppy, can’t the company at least acknowledge this notion and offer a simple “thanks” for purchasing it in the first place?

There are no dads anywhere

You can’t find even one dad photo anywhere at boppy.com, unless you consider the degrading drawing of ignorant Abe Lincoln putting the Boppy on his head like some clueless dad. And no, we don’t count the guy in the Martha Stewart photo or the two male employees – who knows if they’re dads? We’d like to see an even 50-50 ratio of dad stock photos with moms.

Would Lowe’s or Home Depot ever dream of featuring all dads/men on their site accompanied by a sexist slogan like, “Support for all dadkind”? Of course not, there’d be a mom uprising, and rightly so. It wouldn’t be right.

So why does Boppy get away with it the other way around?

All the baby boys pictured on the site had better enjoy the attention while they can, because they’ll be ignored and forgotten the moment they become fathers by the very company who once featured them.

Boppy claims to be “beloved by over 15 million moms worldwide!” That’s an amazing statistic which should make Boppy very proud. But you know how many dads (who are potential customers) they’ve managed to ignore?

We seem to be on a Jif Rift lately.

Part of it has to do with Jif ads on TV. They’re continuing to use the outdated, old fashioned choosy slogan that further validates they are the “Washington Redskins of Ad Slogans” (refusing to change when others say they need to). Their new ads during prime time bring back the unpleasantness into the limelight once again, so in effect they’re creating their own problems.

Another complaint has to do with their blatant snubbing of our inquiries. We’re simply trying to chat with them via Twitter, but they’re flat-out ignoring us. Herein lies the principal reason we were formed – to stop dad exclusion in marketing and advertising. It doesn’t matter how good a product is, if Jif doesn’t even listen to its consumers (i.e., dads), they’re not maximizing their potential. Period.

Odd as all that may seem (and believe us, Jif continues to get more odd everyday as they press on with this ridiculous slogan in today’s world), the fact they added their only-audible, non-print dad-add-on, “Choosy moms and dads choose Jif,” makes things even more peculiar.

Here’s what Justin Aclin of the excellent Hunter PR blog wrote on February 22:

“‘Brands get in trouble when they think having a dad in the commercial necessitates calling out that it’s a dad,’ said Chris Routly—who gained national attention when his blog The Daddy Doctrines called out a Huggies ad campaign to the point where the ads were eventually pulled—on a panel discussion called ‘Marketing to Today’s Dad.’”

As if this quote wasn’t enough, notice the image featured in this blog post. Doesn’t the photo make Jif look like a confused company when coupled with their slogan? And as we pointed out on July 17, this silly add-on only draws more attention to the fact that Jif has excluded dads for a long time.

Jif, please make things right and be a brand of the future, not your past – because as we consumers see it now, your past is your present.