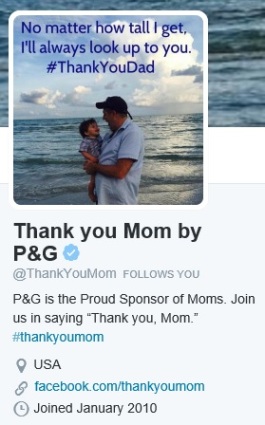 The talk began when we noticed its Father’s Day plug, awkwardly matched with a Twitter handle which only thanks moms (right). Here’s how it went:

We want to emphasize how P&G’s use of Twitter to communicate is so impressive, and it was a true pleasure to chit-chat with a friendly social media team. However, it’s more than disappointing how companies – major companies like P&G – still ignore dads when it comes to parenting.

Now let’s take a look at the ads featured here (click to enlarge), found on back-to-back pages of a parenting magazine this month. What’s 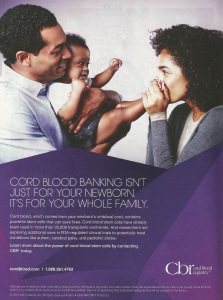 the difference between them? One includes only an image of mom, which would be fine enough on its own, but then it reinforces the mom’s-the-lead-parent-when-it-comes-to-babies agenda with accompanying ad copy that reads, “He feels Mom’s gentle touch.”

The other ad shows both mom and dad, with text that reads, “Cord blood banking isn’t just for your newborn, it’s for your whole family.”

In short, one ad speaks only to mom as a parent, another speaks to both parents – and the former is lot like P&G’s Twitter site and Olympic campaign.

Let’s say you’re at a party with your spouse, where you’re meeting lots of new people. If one of these new acquaintances is only speaking to your spouse, and not involving you in the conversation whatsoever, how might that make you feel?

It’s going to make you feel like dads feel after seeing the Johnson & Johnson ad, which make them look for a different baby soap on the store shelf. Sadly for J&J, it has a history of negating dads as parents.