“Do you realize that toilet paper has not changed in my lifetime? It’s just paper on a cardboard roll, that’s it. And in ten thousand years, it will still be exactly the same because really, what else can they do?”

Later in this same episode, George’s friends Jerry and Elaine point out that toilet paper has become softer, there’s more sheets per roll and it comes in a variety of colors. Nevertheless, George is ultimately right. Despite some minor tweaks, there’s really not much that can be done with toilet paper; the basic concept has remained the same.

A magazine ad, however, has no limitation when it comes to creativity and reinventing itself. The beginning canvas of an advertisement starts as blank as Puddy’s mind, and the advertising agency has complete control to design and say whatever it pleases.

Why then, have we not advanced further when it comes to the way retailers sell their products?

Take, for instance, the two ads featured in this entry. The tie ad might have been socially acceptable at one time, but it is taboo now. If used 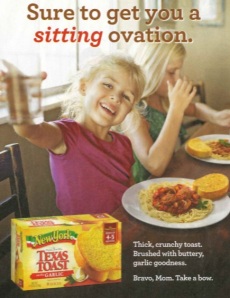 today Van Heusen would surely get some icy stares from the media, public, and anyone with a pulse. That ad today might even be deemed illegal.

But what about Texas Toast’s humdinger? Just a harmless ad with cute girls giving thanks to mom for the delicious Texas Toast on their plates?

Hardly. The ad perpetuates the same stereotype existing at the time of the Van Heusen ad, that moms are the ones who take care of their kids. Why isn’t it taboo?

It’s because ad execs are still trapped in a bygone era where market research tells them moms buys the Texas Toast, not dads. Even if that were true, why slight dads and propagate the stereotype?

The NFL has only four black head coaches out of 32 teams, but does that mean blacks can’t coach? Of course not! And in other news, dads have reportedly been seen at grocery stores from time to time.

We here at dadmarketing think Texas Toast needs to revise their ads in the future, or we’ll tear them out of the magazine, and promptly put them in the same place we do toilet paper.