A few days ago we retweeted a story about this young girl who fought back against a sexist sign, and ultimately claimed victory as the sign was removed. 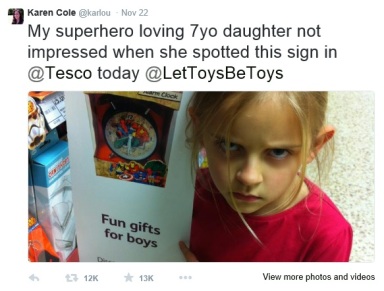 Her modest, ingenious and charming complaint challenged the higher beings at a store in England, and executives listened.

Her protest got us thinking about the foolishness of Jif’s tagline, Choosy Moms Choose Jif.

If a young girl can get the attention of a large retailer, why can’t Jif take inventory of its own sexist practice? Doesn’t their parent company, Smucker’s, want to market their goods to all and be perceived as a modern, progressive, with-the-times business? What does their four-word marketing message say to households without a mom present?

We’ve discussed some of Jif’s plight before, and again, and yet again.

Jif’s stale slogan was created decades ago, during a bygone era when mothers generally handled cooking, cleaning and household shopping. Jif is essentially hanging that chore on mom in present day, and indirectly, the cooking and cleaning, too.  Doesn’t Jif’s approach remind you a little of this?

Yes, even as the year 2015 looms, an embarrassing, inane catchphrase has long passed the old-fashioned phase; in today’s world, the saying looks downright irrational.

The interesting thing about Maggie’s dispute is that despite its marvelous simplicity, it only changed in-store wording for the better. For example, another major retailer, ToysRUs, still categorizes shopping selections as “Boys’ Toys” and “Girls’ Toys.”

So, in theory, little has changed and her fight could still go on.

Jif, on the other hand, is so stuck in time and dead set in its ways that we know there’s still a long way to go toward making things right. Jif is indeed a tough peanut to crack (they won’t even respond to us, or acknowledge us), but we know at least one 7-year-old who could bring the entire empire to its knees.

What do you say, Maggie?