Laundry.  It comes in heaps and never stops, and this week we found a few items in need of a good washing.

First, let’s take a look at the latest Arm & Hammer ad, which offers something both endearing and cautionary about the way it positions its brand. 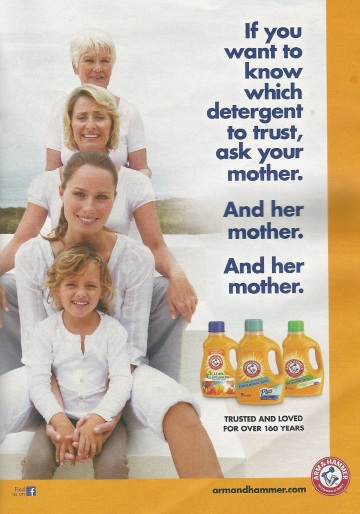 On one hand, A&H takes a clever, charming approach by using generational ties as laundry solutions.  We can certainly appreciate the appeal of doing things the way our parents did them.  Passing down advice from one generation to another offers a timeless sentiment that pulls at our emotions.  That aspect is nice.

But on the other hand, with piles of laundry comes great responsibility.

That laundry room in your home – yes, that one over there – must be handled with extreme caution.  It’s dangerous to assume that it’s mom’s domain. That would be inconsiderate, old-fashioned and passé, sort of like saying a mother’s place is in the kitchen.  Frankly, it would have been better had A&H had not even gone there and employed this motherly theme.

We acknowledge that sometimes an idea can be too good to pass up, but that doesn’t mean you still can’t.  Look at the incongruity the New York Times offers in name with its Motherlode section – a section which supposedly covers the issues of parenting.

So, by A&H using mom as the focal point, we’re all led down a path to believe that laundry is the mother’s duty.  That creates perceptions that aren’t necessarily true, especially in today’s modern, dual-income, gender-lines-have-been-blurred, and everybody-takes-on-different-roles world. 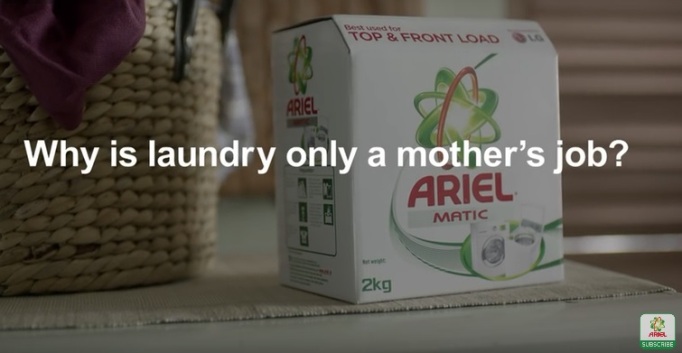 Which brings us to the peculiar ad unveiled by Indian detergent maker Ariel.  In it, Ariel offers an apology to moms everywhere, on behalf of dads, for guys not helping with the laundry.

Admittedly, we’re somewhat ill-equipped to analyze this ad, as we have no awareness of Indian culture.  However, for the purposes of this column, we’ll probe within an American context.

The Ariel ad is admirable for encouraging everyone to help around the house, but sadly, it’s at the expense of dads.

Once again, dads are made out to be the bad guy – the lazy spouse – and coerced into apologizing unnecessarily.  Let’s put this ad in perspective:  you have to remember that in days past, when the dad traditionally went to a job all day and was the sole breadwinner, it was the mom’s duty to run the household – and there’s nothing wrong with that scenario even today.  Both roles contribute to a family and household, even if they’re held by opposite parties nowadays.  No job is more important than the other.

The older father in the ad shouldn’t have had to apologize for anything, unless he wasn’t carrying his load and doing his part in life.  The younger father in the background, clearly isn’t – at least for the brief period shown in this elongated ad.

A&H curiously has an ad of its own, and not once is a male of any age shown.  Perhaps these laundry detergent makers could have compared notes, rather than send conflicting messages that only leave dad caught in the middle of two contradictory campaigns:  one that puts dad at fault, another that says it was never dad’s job in the first place.

So when the A&H ads are stacked up next to Ariel’s apologist campaign, it’s more than a little disconcerting to see the commercial’s closing question:  “why is laundry only a mother’s job?”

I think we all know the answer to that question:  it’s not.

But, maybe, just maybe, that question is better posed directly to A&H.

Tell us, A&H, why is laundry only a mother’s job?

One thought on “Is laundry only a mother’s job?”