Last month we came across a thought-provoking post titled “Needlessly gendered products for men.” There’s actually several articles on this topic, so consider reading at least one of them via your friendly neighborhood browser. 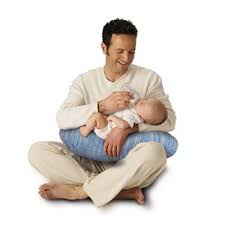 Anyway, that post made us consider the many needlessly gendered slogans which exist, phrases which promote products unnecessarily aimed at one gender:

Jif Peanut Butter – to its credit – is slowly releasing the stranglehold it has on its timeworn phrase, but it’s still hard to believe the CEOs of these companies continue to cling on to these old-fashioned, sexist slogans, allowing their marketers to intentionally discount the viability of at least half of its customer base, particularly with products that have nothing to do with gender.

Alas, peanut butter is no more a feminine product than watching football is intended solely for men.

But then you have some products which seem to bemuse our perception, products which have been marketed for so long, positioned in such a convincing way and aimed at a certain audience that we’ve come to believe its use was envisioned strictly for one gender.

That’s certainly the case with the Boppy, which for 26 years has made us believe it is a breastfeeding pillow.  For starters, go ahead and visit boppy.com and notice your browser, which reads “nursing pillow.”

Its website is loaded with mom-only references, and yet you may be surprised to know the product was never intended for nursing.

According to this story, inventor Susan Brown came up with the idea in 1989 when, her daughter’s day care center requested parents to bring in pillows to prop up infants. Brown’s idea for a horseshoe-shaped pillow soon came about, but Brown never invented it for the sole purpose of breastfeeding:

“Now it’s almost embarrassing to admit, but when people started using it for breast-feeding, I was like, ‘Oh, yeah.  Of course,’” she said.

A brief reflection upon its own history and founding – and a glance at its own latest ad – may encourage Boppy to return to its roots.  Check out the bottom of this ad, where Boppy describes four of its product’s core uses, none of which have to do exclusively with moms (while physical breastfeeding does, general feeding – the word used in the ad – doesn’t).

If a Boppy can do all these things, why exclude dads from its marketing and ignore dads’ contributions to parenting?

Yet it specifically proclaims the Boppy to be mom’s domain.  It’s another unfortunate exclusionary tale which makes us wonder at least four times over:  why not use the word “parent” instead of “mom”?  Replacing that word would no longer alienate dads, it wouldn’t make moms turn the page in revolt, and Boppy would position itself as a true baby product for both parents.

It’s a little ironic that Boppy references “boy bands” is its clever headline.  Several members of those ‘90s bands are now dads, and rumor has it that some of them even use a Boppy.

What do you say Boppy?  Twenty-six years is a long time, but it’s time to start recognizing both genders as equal parents.